Dr. Stone Season 2 Release Date Confirmed? Check Trailer and Spoilers Here: Earlier today second season of Dr.Stone was announced by Crunchyroll. It was confirmed earlier that Season 2 of the anime will come and now Crunchyroll confirmed the rumors and made it official. Dr.Stone is based in manga of the same name. Written by Riichiro Inagaki. Anime came out last year in the month of July and the English version of the anime came out in the last week of August of 2019.

By some natural phenomenon, every human on Earth turned to stone. And after almost a thousand-year wait, Senku Ishigami was freed from the stone barrier. Civilization is completely destroyed. Senku decided to re-build the civilization from scratch with the help of his childhood friend Taiju Oki and Yuzuriha Ogawa. They have to build the civilization from nothing, Two million years of advancement of science have to be done in just some years. Will they be able to do it? Are these three only humans present in this stone world? A mysterious and interesting journey is waiting for all three of them.

Crunchyroll earlier today announced that the fan-favorite anime will make its comeback in January 2021. But given the current circumstances of the world and with season 1 coming out just last year fans were expecting some more wait before season 2. But Crunchyroll made the year somewhat better with the announcement of season 2.

Season 2 will continue its story from right where season 2 was ended. Season 2 was teasing ‘Stone Wars’ as soon as the season 1 ended. The title ‘Stone Wars’ clearly implies that we will see the battle between the army of Tsukasa and The Army of Science lead by Senku. We will also see what will happen to Taiju and Yuzuriha and how they will help The army of Science and how they will escape the hideout of Tsukasa.

Season 2 will most probably have the same number of episodes as Season 1. That means 24 episodes within a single cour. The show will run for probably 6 months. 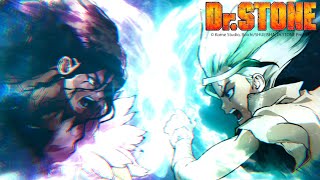 A new trailer and key visuals were launched that showed us new characters and some snippets of the war we are about to get. The trailer is enough to get people hyped up about the show the second season and the trailer confirmed it that the new season will be a must-watch