2.43: Seiin High School Boys’ Volleyball Club New Preview, Release Date, And Other Details: The official site of the upcoming anime just released a new promotional video for the anime on Monday. “2.43: Seiin High School Boys’ Volleyball Club” is an upcoming High School Volleyball Anime. It is based on the light novel of the same name written by Yukako Kabei and illustrated by Aiji Yamakawa. A manga adaptation by Yamakawa was released in July 2018. The anime adaptation was announced in June earlier this year.

Kimichika Haijima had to move back to his hometown as he caused some trouble in his Junior High School. He enrolls in Seiin High School with his childhood friend Yunii Kuroba. Both of them are outstanding players and are passionate about volleyball. But, Yunni is a choker as he is always vulnerable under pressure. But with the talent Kimichika possesses, they both make a keystone combo that everyone will fear. With the other members of the Volleyball Club, the Seinn High School team becomes the dark horse of the Fukui Region. But reaching nationals will not be an easy task as many formidable contenders are standing between them and the nationals.

The anime will come out in January 2021. The specific release date is yet to be revealed. We will update you as soon as we get any new information about the release date. As of now, we will be getting the anime in late January. This anime will come on our screen right after Haikyuu’s fourth season, so it will be good to help us not miss Haikyuu that much. So, if you are a sports anime fan, it is good news for you. Considering that site will reveal three more visuals in the next three weeks, we can expect a release date soon.

Yasuhiro Kimura is directing the anime with Yousuke Kuroda handling the series composition. Yuuichi Takahashi will be in charge of designing the characters and Yugo Kanno will take care of the music.

A new promo was released on Monday. The promo was a character introduction video. The promo gave a first look at the characters of the anime. 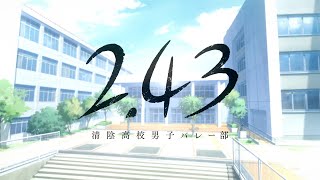 The anime will air on the NoitaminA programming block, which means it will air on any TV stations owned by  Fuji TV. The most obvious online portal for this anime is Funimation, as FujiTV and Funimation are partners.