Bottom-tier Character Tomozaki New Trailer, Release Date, Preview, Cast, and Other Details: The official website of the upcoming anime just released the first trailer of the anime. Bottom-tier Character Tomozaki is a Japanese light novel series written by Yūki Yaku. A manga adaptation by Eight Chida came out in 2017. The anime is going to adapt the light novels instead of the manga so it will be really interesting. It is regarded as one of the best high-school romance light novel by its readers. It was ranked in the top 10 light novels in This Light Novel Is Amazing! Guidebook for the past three years. Bana Yoshida launched a spin-off manga in 2018.

The story revolves around a bit named Tomozaki. Tomozaki is one of the best gamers in Japan and he thinks that real life is the worst. The real-life rules are hard and twisted and are irrational and unequal. The strong remain strong while the weak are always oppressed and violated. But, Tomozaki’s whole life changes when a girl who is on par with Tomozaki in gaming skills tells him that ‘Life is a beautiful game’. Hinami Aoi is the female protagonist of the anime. She offers Tomozaki to teach him the rules of life’s game. Impressed by her unique character and appeal Tomozaki agrees and they both go on a journey that will be both beautiful and heartbreaking.

Both of them will face many hiccups during this journey. They both will come close to each other and will Tomozaki learn to love life? Will he find real-world beauty? To find out we have to follow both of them in their journey.

The anime is all set to release in January 2021. The specific release date of the anime is yet to be revealed so keep an eye out here as we will update you as soon as some information is revealed. The release date is considered to be late January, probably after 15 as we are getting so many new animes in early January. But we have to wait for the official announcement.
Shinsuke Yanagi is directing the anime, and Fumihiko Shimo is handling the scripts. Akane Yano is in charge of character design, and Hiromi Mizutani will take care of the music. Idol Group DIALOGUE+ will perform the opening and ending theme songs of the anime. Pony Canyon and APDREAM will produce the music, and Dream Shift will produce the anime.

A new teaser was released on Friday, which showed us a glimpse of the anime. It also previewed the theme song of the anime “Jinsei Easy?” (Life Is on Easy Mode?) and “Ayafuwa Asterisk.” The animation of the anime looked good, and now the only question is how well they will adapt to the light novel. If they can adapt it with all the emotions without making anime unnecessary long and mundane, it will be one of the best in its genre. 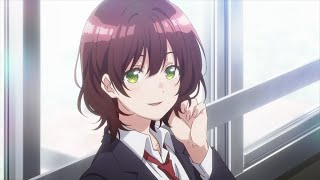