Entertainment - Anime - Haikyuu!! To The Top New Key Visual and Preview, Release Date and Where To Watch?

Haikyuu!! To The Top New Key Visual and Preview, Release Date, and Where To Watch?: A new key visual and a final trailer of Haikyuu!! To The Top just streamed on their official twitter page. TOHO Animation official youtube channel also posted the trailer. And other than that, Furudate himself made a new visual for the upcoming anime. Haikyuu is one of the most loved anime. Now the fans are waiting for the anime, and the wait is almost over. Haikyuu is based on a manga of the same name. Haruichi Furudate is the writer of the manga. After the manga ended earlier this year, ‘#thankyouhaikyuu’ was trending worldwide.

Haikyuu!! To The Top Part 2 Plot

Haikyuu!! To The Top will start right after episode 13. At the end of Episode 13, the match between Inarazaki and Karasuno was just begun. And now in Part 2, the game will start for real. The match between Karasuno and Inarazaki is one of the most exciting matches of the series. If you have read the manga, you’ll know that the things that will happen in this match will be amazing. You will not be able to leave your seats for the whole match.
The match is going to decide the fate of the Karasuno national journey. If they win they will advance, if they lose they will be out of the tournament and their dream will end right there. It’s Do or Die at this moment now, and every point will matter.

Episode 14 of the fourth season is all set to release on October 2, 2020. Previously the episode was supposed to come in July 2020. But it was delayed due to COVID 19 pandemic.

Haikyuu!! To The Top Part 2 Preview

The official twitter account of the anime streamed a new trailer a few hours ago. The new trailer focuses on all the players of Karasuno. The trailer also shone some light on characters like Tanaka, who is usually unnoticed. If you have read the manga, you will know that Tanaka will have a massive involvement in this game.
By the looks of the trailer, we think that the next few episodes will focus only on this match. The thing is, they might even end season 4 with this match only. We have seen Karasuno VS Shiratorizawa in the past, which was ten episodes long. It will be interesting to see what will they do with this match as this match can easily be dragged for more than ten episodes for sure. But if they do that they have to make a new season for the remaining of the Nationals Tournament and that will mean more wait for the fans. 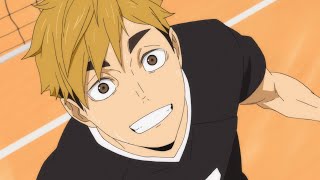 Haikyuu!! To The Top Where To Watch

You can stream Haikyuu’s previous season on Crunchyroll and Netflix. In India, Netflix will add season 4 after some time, but you can stream the anime on Crunchyroll. We request you to use only the legal websites to watch the show as it will help the creators.