Karmachakra: Episode Zero: First Indian Anime: Release Date, Plot, and Other Details: Studio Durga created a stir within the whole Indian anime fandom when they announced that they will be producing the first Indian Anime. Indian anime fanbase is not that big, Everyone in India had sometimes watched anime in their life but most of them have no idea what anime is. Anime like Pokemon, Beyblade, Digimon aired on our television and back in the time I also used to say that they are cartoons, not anime.

I realized what is anime, not so long ago. So by making an anime in India with no support from any foreign company and that too with not that big of a team, It is an amazing feat to achieve. Studio Durga is a Delhi based Studio. The founder and the CEO of the Durga Studio is Rajorshi Basu.

Basu and his team which included Samadrita Ghosh, Ananya Garg, Shilpa Susan Koshy, Monideep Chakraborty, Alen Shibu, and Ankit Shrivastav decided to produce an anime in India as India has a considerate amount of anime fans in but no anime has ever been produced by only Indian Citizens. Studio Durga on October 12, 2019, announced the first Indian Anime with a trailer. 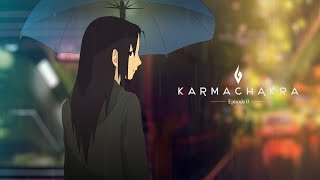 And after that Studio, Durga announced a mini-series of Karma Chakra on 25th October 2019, with an Instagram post.

The mini-series consisted of 6 episodes with finale releasing on 1st February, 2020. Every episode of the series was roughly 3 to 4 mins long and the whole mini-series is available on Studio Durga Official Youtube channel for you to watch.

The mini-series was pretty dark and in the second episode we get to see the main protagonist of the show, a girl named Ganga. Each episode is roughly 3 minutes long so saying anything will be a spoiler, but the mini-series is worth watching and you should all watch it.

On July 4, 2020, Studio Durga released another video on their youtube channel in which they asked the general audience to vote on the streaming service where they want the anime movie to be released.

The two mentioned streaming services were Hoichoi and Hotstar. Studio Durga has given the fans the whole month of July to vote so we can expect the anime movie to be released in August or September, any delay, and the fans will somewhat lose the excitement as the movie is already delayed due to the Corona Pandemic.

Karma Chakra is a story about an orphan girl Durga and the story revolves around the mysteries from her past and present. The movie is set to be in a fictional India and took inspiration from psychology, Hindu mythology, and cybertechnology.

Studio Durga is working on this project for two years and wanted to release it in mid-2020 in the theaters but due to pandemic it is not looking possible and that’s why they went to the streaming services to release the movie.

The movie is supposed to be 80 minutes long and the first 20 minutes of the movie were already released on their youtube channel as the pilot episode.

By the looks of it, the movie is going to release on Hotstar and Director Basu has requested for your support to make this anime a success. And we also request you to support the anime because even with the minimal resources the studio has done an amazing job with the animation and the music of the anime is excellent nonetheless. The first 20 minutes of episode zero had almost no dialogues but the background music and OST of the movie were enough to make anyone interested in the movie.