Entertainment - Anime - Love Me Love Me Not Release Date, Cast, Plot, Trailer, Story, & Where to Watch?

Love Me Love Me Not Release Date: The official website of Love Me, Love Me Not manga just posted a music video. The music video posted is of the movies’s theme song “Gravity” by Bump Of The Chicken. The song is a melody to the ears. The video also features some footage of the film.  The upcoming anime film based on a shojo manga of the same name. The live-action adaptation of the manga released last month in Japan.

Love Me, Love Me Not Plot

The story focuses on two girls named Yuna and Akari. Yuna is a shy girl who loves Shojo manga but has not been in a relationship ever and Akari is a realistic girl who doesn’t have any unreal expectations. Both of them meet during a train ride and became friends when Akari returns the money she borrowed from Yuna for the train ride and later finds out that they both lives in the same building. The main focus is on their attitude towards love, which is the complete opposite of each other.

On one hand, Yuna just wants a fairytale love story that will involve his prince charming and all. On the other hand, Akari is realistic when it comes to love. Things get complicated when Yuna falls in love with Akari’s brother Rio, who won’t reject anyone as long as the girl is cute and Akari falls for Yuna’s childhood friend Kazuomi who really doesn’t understand love and have no idea about it. There will be lots of hardships in their love story and it will be an emotional ride throughout the movie.

Love Me, Love Me Not Release Date

The movie was supposed to release on May 29, 2020. But due to the COVID pandemic, TOHO delayed the release date of the movie has been shifted to  September 18, 2020.

A streaming platform to watch the movie hasn’t been announced yet. But it will soon be announced after the movie is taken down from the theater. It can also get theatrical release once the theaters are open, but that looks really difficult. We will update you as soon as we get some information.

Love Me, Love Me Not Cast

The cast of the movie was already announced with all four major cast members were revealed.

The cast of the series is really solid. Every cast member has voiced at least one major character from a big anime.

Love Me, Love Me Not Preview

The final trailer of the upcoming anime was released last month. The trailer was really good and gave us a glimpse of the song “Gravity” Bump of The Chicken. Now, the song has been released you can enjoy it as much as you like. 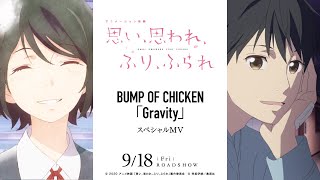 Facebook0Tweet0Pin0LinkedIn0
TagsLove Me Love me not