My Hero Academia Season 5 Release Date, Preview, Plot, Cast, and Other Details:The first promotional video of My Hero Academia season 5 just streamed on the anime’s official Twitter account. It also revealed the release date of the upcoming season. We also got to know the first arc of the first season, as the promotional video showed it. My Hero Academia is based on the manga of the same name. Kōhei Horikoshi is the writer of the manga. The first season of the anime aired from April to June 2016. Previous seasons of the anime were significant hits, and fans loved the series.
A new visual was also released, which showed the characters the first arc of the anime would focus on. The new visual showed the students of class 1A with some students of class 1B as well.

My Hero Academia follows the story of Izuku Midoriya. It is set up in a world where almost everyone is born with some superpowers. Izuku, who wants to become a hero, has no superpower and was deemed as a failure. It was declared that he couldn’t be a hero. But his whole life changed when his idol All-Might told him about his transferable quirk and chose him as his successor. His successor Midoriya attends the prestigious U.A. High School. Alongside his friends, he starts his journey to becoming the greatest superhero ever. Will he become the greatest superhero he always dreamt of? You have to watch the anime to find that out.

Season 5 will start after the events of season 4. As shown by the trailer, the fifth season’s first arc will be the “Joint Training” arc. Joint Training arc was the arc that broke the internet for a while. Not because fans loved it, but because they hated it. Fans hated the arc as a whole. As this arc doesn’t have any stakes, had no character growth and fans hated the way main characters were getting power up. But this arc is just a transitional arc with no immediate payoff. It sets the manga up for the upcoming big arcs.

The official twitter account of Funimation revealed that the anime would come out in Spring 2021. As of now, no exact date has been announced. We can expect the release date to be Early April, just like the previous seasons. And by April, other big-name animes like Attack On Titans will probably end. So, keep an eye out here as we will update you as soon as we get some information.

The cast for the upcoming season is expected to be the same as previous seasons, as there is no official announcement regarding that. Even though there is any change or any new addition in the cast, we will update you here.

A new preview was released on the official twitter page and later TOHO animation released it on their official youtube page. 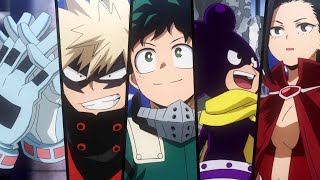