Entertainment - Anime - Nagi-Asu: A Lull in the Sea Release Date, Preview, Cast, And Where To Watch?

Nagi-Asu: A Lull in the Sea Release Date: Netflix is serious in this anime business. Two animes were already announced for August on Netflix and now another anime has been announced for August. Nagi-Asu: A Lull in the Sea is an anime that was released in 2013 and now it is getting a Worldwide Netflix release. The series ran for 26 episodes, from October 2013 to April 2014.

A manga adaptation was also started in June 2013 by Risō Maeda. The anime was really well received and fans were really moved by the anime. The anime was a roller coaster ride and it stills feels like an underrated anime that is not talked about much. So, it’s getting a worldwide release is really a piece of good news for slice of life anime fans.

Nagi-Asu: A Lull in the Sea Plot

All of them face hatred on the surface world and were discriminated against on both the sea and the surface. And from here onwards, their journey starts. Their struggle to adjust in the new environment, their newfound feelings, and the relationship between sea and land people, all of this is shown every beautifully in the anime and the end result is a tale so emotional that will leave you in tears at the end of the anime.

Nagi-Asu: A Lull in the Sea Release Date

The anime will be available to stream on Netflix from 1 August, 2020. The series had an original run from October 2013 and ended in April 2014. It was divided into two cours. Netflix might release it in 2 parts or might release it whole altogether. So, we just have to wait till 1 August to see what will happen.

Nagi-Asu: A Lull in the Sea Cast and Characters

All the other cast members and characters will be the same.

The anime is directed by Toshiya Shinohara. Mari Okada is a screenplay writer and Buriki is handling the character designs. The series is produced by P.A. Works. NIS America, Siren Visual, and MVM Entertainment had the streaming rights in America, Australia, and United Kingdom respectively and now Netflix will stream the series throughout the world.

Nagi-Asu: A Lull in the Sea Preview 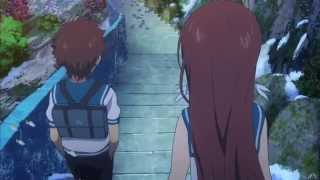 A trailer was already released in 2013, when the anime was aired originally.

Facebook0Tweet0Pin0LinkedIn0
TagsNagi-Asu: A Lull in the Sea