Street Dancer 3D is a dance drama film that is directed by Remo D’Souza. The film stars the best dancers from the Bollywood industry, including Varun Dhawan, Shraddha Kapoor, Nora Fatehi, and more. Some of these faces had starred in these similar movies before, which was Disney’s ABCD, Any Body can dance. And Street dancer 3D was supposed to be a sequel, but Disney dropped out, and then Bhushan Kumar took over as a producer. The movie is released on the 24th of January 2020 and will have a world television premiere soon.

Street Dancer 3D world television premiere will be on the television channel Sony Max HD. The premiere is set to be on the 18th of October 2020 at 12 pm. Street Dancer 3D is a perfect family watch movie, and since it will premiere on Sunday, it will be good entertainment. The film has some fantastic dance routines and a good story, making it a decent hit when released in the theatres. There are many songs from the movie and hook steps that were a sensation on the internet. And some new faces totally made their stand out performance on the screens. 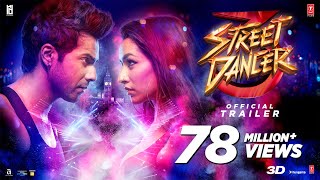 The movie’s story mainly revolves around two rival groups who, in the end, team up together to win a competition. There are two groups, one lead by Sahej and the other lead by Inayat, both extremely well dancers. Inayat is a Pakistani, and mainly her family is very conservative, so she dances in the street so that they don’t find out. Sahej dances for his brother, who is also a dancer but can’t dance further because of injury. When a big dance event, “ground Zero competition,” comes up, things start to get the pace. Since Inayat finds a reason to win the competition and use the money for a good cause, Sahej is not entirely on board because of the rivalry and a few things in the movie. But what happens, in the end, they work together to win the prize money. Catch the film on Sony Max HD on the 18th of October 2020.

Street Dancer 3D starring Varun Dhawan, Shradhha Kapoor, Nora Fatehi, will be having a world television premiere on Sony Max HD. The film will air on the 18th of October 2020 at 12 pm. The central plot of the movie revolves around two rival gangs aiming to win a competition. But in the end, they team up to win for a good cause. Stay tuned to know more movies and web series at world wire.