As expected, the trailer didn’t really attract the fans. The history of anime and their live-action adaptations have been awful. But there are some exceptions, and we hope that this movie is one of them. The live-action movie creators have aged up the characters to cast good actors that can play these demanding roles. So, the expectations are high, and we hope that the movie lives up to those expectations.

The story is set in the year 2045, where Emma, an 11-year-old, lives with 37 other orphan kids. Their lives at the orphanage are exceptionally comfortable with good food, sleeping rooms, and a caring caretaker Isabella. Emma is best friends with two friends named Ray and Norman. But everything changes when they found one of their friends Conny, dead while getting adopted. The dark truth behind the orphanage reveals that it is up to Emma, Ray, and Norman to save everyone. Their whole life and existence are at stake. The live-action movie will focus on the first season of the anime. It might cover the whole of season 1 till the final escape.

The movie will release on December 18 in Japanese theater. The movie’s streaming details are yet to be announced, but if we look at everything, the movie should come on Netflix in India. But as Amazon is producing the movie, we can get the movie on Amazon too. Nothing is confirmed, and we are just speculating at this point. We will update you as soon as some information is released.

Yūichirō Hirakawa who has previously worked on the live-action Erased film is directing the movie. Noriko Goutou is working on the script of the film. Rock Band Zutomayo will perform the theme song “Tadashiku Narenai” (It Can’t Be Right). 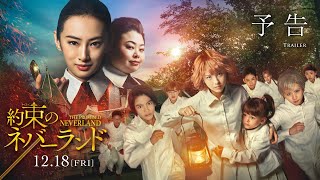