Khuda Haafiz is an upcoming Indian Hindi-language action thriller film written and directed Faruk Kabir. The movie stars Vidyut Jammwal and Shivaleeka Oberoi in lead roles along with many other Bollywood supporting cast. The shooting for Khuda Haafiz had commenced near Uzbekistan on 14 October 2019 and will soon be released for the audience to enjoy. Today we get more in detail about the upcoming blockbuster movie Khuda Haafiz.

Khuda Haafiz is an action thriller film that will be released on the 14th of August 2020 on the OTT platform Disney+Hotstar. The story of Khuda Haafiz is a true story, and it is fascinating for the fans to the action hero Vidhyut back in action. The series also has a romantic angle to it, which will make it an exciting plot.

The film Khuda Haafiz is inspired by a real-life incident that took place in 2008 when a man went out of his way to rescue his wife, who was abducted and forced into human trafficking in the UAE. The newly married couple Sameer and Nargis falls in a trap when his wife is taken to the UAE and is forced into some illegal work. He tries to contact her a lot, but when he receives no response and neither does he receive any help. He takes it upon himself to find his wife.

While Sameer goes on to search for his wife Nargis in the UAE, he comes across many dark secrets of the Human trafficking secrets going on there, and he also encounters many difficulties in finding her. But will he manage to rescue her? Will he save any other women that are trapped in this shady business along with his wife? This is the interesting plot and storyline line that the movie Khuda Haafiz will follow. Since it is based on a real story, it will surely keep the audience on the edge of their seats. 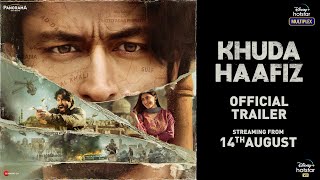 The movie Khuda Haafiz based on the real-life events back in 2008, will be released on the OTT platform Disney+Hotsar on the 14th of August 2020. the film will star Vidyut Jammwal and Shivaleeka Oberoi in lead roles, and other actors will also support them. It is a must-watch film if thriller movies are something that intrigues you and not to doubt the acting the movie will indeed make you grip your teeth. For more such exciting updates, stay tuned to world wire.