What is World of Warcraft? I know the majority of the veteran gamers like you already know what I am talking about. But in case if you’re new here and you don’t know about the game, then World of Warcraft is a Massively Multiplayer Online Role-Playing game (i.e., MMORPG) ever to exist. To make it simple, let’s say the game is just “WOW”. We shared Wow Expansion List in this article.

The initial release of World of Warcraft (WOW) was in 2004, and ever since, the game is being updated and expanded into many regions and skills known as the game expansions. To date total of 7 expansions have been released since the first, and the game looks like a never-ending phenomenon.

If you have been drifted from the game in between or about to start playing it or are already done with it and want to relieve all the expansions and details. Any of the reasons it may be, you are in the right place, my friend. You will be learning about the World of Warcraft expansion list in order here.

Before going onto the WOW expansion listt, let’s talk about its base.

World of Warcraft Base

The World of Warcraft was first launched in the year 2004, following the release of the highly popular Warcraft III – The Frozen Throne, which provided a boost to the MMORPG genre into the spotlight. Although it wasn’t the first MMORPG to be ever made, but Blizzards (Blizzard Entertainment) took an existing genre and then the combined and marketed it brilliantly.

The appealing part of the game was its vast customization that the players could experience, which ranges from their pets to the character skins that they can have in the game.

As the game evolved over time, the gameplay became more intense, often skipping some of the more “dormant roles,” such as feeding pets in exchange for discovering more aspects of the world.

With a player count of nearly 10 million, World of Warcraft was the world’s most popular MMORPG in 2009. The game crossed over a hundred million registered players till 2014. By the year 2017, the game had already grossed revenue over $9.23 billion, making WoW one of the highest-grossing video game franchises of all time.

World Of Warcraft Expansion List In Order of their release date.

The Burning Crusade was the first of the many expansions of the WoW franchise, which was released in 2007. It has a special place in the heart of original WoW gamers. The game introduces two new races: 1) The Blood Elves for the Horde and 2) The Draenei for the Alliance.

The legend of the Hellfire Peninsula brought Illidan Stormrage and all the weapons of Warglaive, for which players worked very hard to acquire them. Fans took off immediately to raids, which included the Gods of Zul’Aman, Fury of the Sunwell, and the Black Temple.

Challenging gameplay makes this game a problematic expansion to work through, but veteran players always call this game as one of the more rewarding expansion packs of all. It’s a must-play for fans of the WoW, especially since many of those past details helped the developers create the worlds which we see in modern storylines.

Another plus of this expansion pack was that the Player versus Player (PvP) system was added. Along with the addition of a new battleground, Eye of the Storm, there was also a completely new death-match system that allowed players to face off in teams of 5.

This expansion in the WoW is considered the best of all seven due to its epic storyline, fights, spells, and non-stop action.

WoW’s second expansion revolved around Arthas, the widely beloved anti-hero who was crowned as the new Lich King at the end of Warcraft III-The Frozen Throne.

One of the most significant noticeable differences was that the level cap had once again increased from 70 to 80, allowing the players to unlock even more abilities and powers through training.

There was also a new additional area in Azeroth called Northrend, which was an entirely new continent to explore for players.

After killing off the two most prominent characters from Warcraft III, developers returned back to the older games’ villains. The storyline evolved, which would contain more mythology from the past Warcraft games, mainly focusing on the storyline of Deathwing, a destroyer from Warcraft II.

Cataclysm also added Reforging, the ability to tweak stat bonuses on the gear in order to make the item more helpful to the player. Guild leveling was introduced, which allowed players to achieve valuable extra benefits. And finally, after community requests flying was made possible for the first time in Azeroth,

As same as the previous expansion packs, Cataclysm raised the game’s cap level, this time only five levels from 80 to 85. It also added over 3,500 new quests.

Now focusing on the new continent of Pandaria, the best thing about this expansion was the world-building. The story focuses on the exploration of the mystical island based on the Asian theme, as well as continues on the ever-lasting conflict between the Horde and the Alliance.

Again the level cap for this expansion was increased by five, making 90 the highest ceiling.

It introduced a new class (The Monk) and a new race (The Pandaren), which was the first neutral race that had a choice to join either the Alliance or the Horde, depending upon the player’s choice.

Mists of Pandaria also introduced the Pet Battle System, which is a turn-by-turn combat minigame that revolves around player’s pets, very resembling to Pokémon.

Fun Fact: When crafting or designing the new characters for Warcraft III, a game designer initially created the Pandaren character as an April Fool’s joke, in order to make something silly, absurd, and funny for the game.

The Warlords of Draenor came up with a surprising storyline of an “alternate universe.”

World of Draenor’s alternate timeline takes us back to the vital moment which determined the fate of the Orcish Horde when their home planet of Draenor was still standing. The plot focuses on the alternate way in which history could have played out. What if the Orcs had not made a pact with the Mannoroth, instead of Garrosh Hellscream, which influenced the wild card.

Two significant changes that were applied to the game with Warlords of Draenor were Garrisons and graphics updates. Also, this expansion added a new world of PvP zone called Ashran.

There were a massive amount of details added to the expansion, such as animations and facial expressions, which made the overall game more interesting. And finally, the level cap was increased to 100.

Do you remember how in the Tomb of Sargeras, the original Gul’ dan died? So, following the actual events of Warlords of Draenor (previous expansion), Gul’ dan of an alternate reality is there to reenter it in the prime reality. Too much to handle, right?

And yes, just like that, we are now back to the Illidan and Burning Legion as the main point of the story, and also, the villain Sargeras is thrown into this chaos as well.

Legion introduces us to a new continent to Azeroth, but this time though, it’s the Broken Isles that players previously saw and visited in the Night Elf campaign of The Frozen Throne. There is Dalaran now roaming there, or should I say floating instead of the Northrend to function as a center.

Again the level cap was raised from 100 to 110. The players were introduced to the second-ever hero class, the Demon Hunter

This 2016 expansion pack, The Legion is considered to be one of the best from a technical point of view.

The story of Battle for Azeroth does not revolve around destroying super villains like the previous expansions. Instead, it mainly focuses on the wars and conflicts between the Horde and the Alliance in a War Campaign storyline played in a multi-chapter way.

This expansion, Battle for Azeroth introduces eight new races, which includes four for each group or faction. The Alliance got the Void Elves and the Lightforged Draenei while the Horde got the Nightborne and the Highmountain Tauren, all four of which were added during Legion only for those who pre-ordered the expansion.

This expansion brings two new landmasses to Azeroth in the form of the islands of Zandalar and Kul Tiras.

The latest expansion to the World of Warcraft series is set to be released on October 27, 2020.

The name of the expansion is Shadowlands. It will be focusing on the afterlife of the Warcrafts and will be revisiting some famous previous title characters.

All the fans from all over the world are dearly waiting for the release of Shadowlands. 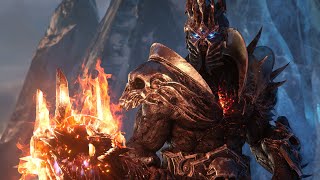 This epic franchise has always uplifted the MMORPG genre in gaming. And it is continuing to deliver the latest and intriguing content regularly. The World of Warcraft will never die in the gaming community. Nor in the hearts of the players who are playing it since its first release in 2004 and also the ones who are starting it recently.

If you like this hand-picked Wow Expansion List by World Wire Team then do tell us by commenting below.

Hello, I am an gaming enthusiast and love to play and learn about new video games. Also a crazy fan of fiction and comics. I write about games, anime and other comic characters on the World-Wire platform.