It looks like you are keen on birds found in Virginia. In this article, we have given the information on a variety of birds found in Virginia. A brief description of the birds with their photos is provided to identify them. We have answered questions like, which are the most common birds? How frequently can you expect them to be seen in the backyards of Virginia? What food birds prefer? Etc.

Recognition: Size & shape: The bird is nearby 17 inches long from its tip to tail. Larger than grackles and smaller than ravens. It has rounded wingtips having each primary feather separated from others.

Habitat: American crows are common birds, and they can be thriving around people. They are often seen in athletic fields, towns, garbage dumps.

Diet: They are omnivorous; they feed on invertebrates, seeds, eggs, human scraps, etc.

Recognition: Size & shape: Smaller in size than American Robins. They have a plump body with a small furry crown on their head with a short beak. The males are red in color, and the females are grey.

Recognition: Size & shape: Looks are similar to city pigeons; however, they are slightly smaller in size. The tail is long, and the legs are short with a round head. Pale brown in color with dark wings and tail.

Recognition: Size & shape: Height lies between 11-13 cm in length. Round body with a tiny round head and a long tail. The feathers are grey, and the body is white with a black bib.

Habitat: They inhabit deciduous forests with wooded residential areas. Also, nest in the holes of a tree.

Diet: Most of their diet consists of insects; they hover near branches to catch insects. They also eat sunflower seeds.

Recognition: Size & Shape: Very small in size, about 5 inches from beak to tail tip. Larger than hummingbirds with a tiny plump with a short tail. Males are lime-yellow in color with a black forehead and wings. Females are dull olive with browner tail and wings.

Habitat: The American Goldfinch prefers weedy fields and fields with thistles and similar plants. They move towards Canadian borders in summer and are found to the Mexico border in winters.

Recognition: Size & Shape: The size of Carolina Wren lies between House Finch and American Goldfinch. It has a short neck, long tail with a thin pointed beak. It Is brown in color with a white line on the eyebrow.

Diet: The majority of their time is spent on the ground searching for insects like beetles, spiders, bugs, ants, etc. They also eat various seeds and fruit pulp.

Recognition: Size & Shape: Similar size that of American Robin. Head with a blue crest, and the neck collared in black, which extends to the crest. White body and blue wings.

Habitat: Generally, they are in the foothills of the Rocky Mountains and woodlands also in scrub habitat.

Diet: Blue Jays are omnivorous; they have strong beaks which they use for cracking nuts. They eat peanuts, grains, berries, and small invertebrates.

Recognition: Size & Shape: It is about 9-11 inch-long from its tail-tip to its beak. The is duller than the male. The head is black, and its body is brown in color. It has greyish wings and a yellow beak.

Diet: Their diet mainly consists of worms and other invertebrates. Also, eat berries and cultivated fruits.

Recognition: Size & Shape: The length lies between 5-6.3 inches from its bill to tail. It has a small rounded body and a long tail. They are dark grey from above with a small black beak and pale from below. It has black feathers around its eye, which makes it more prominent.

Habitat: Inhabits in deciduous forests as well as in parks and gardens.

Recognition: Size & Shape: Large beak and head with 9 to 10 inches of height. Has a long sharp beak with a short tail. Black and white stripes at the back and wings. Pale grey body with a red nape reaching the top of the head.

Habitat: Found in many woodlands like oak, pine, and hickory. They make holes by drilling into thick branches and in trunks of trees.

Diet: The species mainly eats insects and may also eat peanuts or other nuts.

Recognition: Size & Shape: Its size ranges from 5.5 to 7 inches from beak to tip of its tail. It has a short and stiff tail with a big black and white striped head. Black wings have white spots with a white body. The male has a small red spot at the back of its head.

Habitat: Near water, small deciduous trees, and willows. Nest in trees and branches drilled by them.

Diet: Mainly insects, and also seeds and berries. May also feed on shelled peanuts and suet.

Recognition: Size & Shape: Body lengths is between 4.3 to 7 inches from beak to tail. Weight ranges from 12 to 53 grams. It has a short, conical beak and a tiny round head. Complicated head pattern with streaks on sides. Colour varies across its range from dark brown to pale grey.

Diet: Mainly insects and seeds on the ground and may also feed on mixed seeds.

Recognition: Size & Shape: Medium-sized ranging from 8 to 11 inches. They have a slightly curved beak with a long tail. The color varies from grey and darker above. It has white patches on its wing.

Habitat: Preferred habitat is open areas with sparse trees and bushes. They do not nest in dense forest areas. Chaparral and desert scrubs are among its preferred habitats.

Recognition: Size & Shape: Varies from 7.5 to 9 inches. The species has a large head with a short square-shaped tail. The beak is long, straight and pointed and yellow in color. The body is glossy iridescent black color, and spotty white in the winter season.

Habitat: Urban and suburban areas with artificial nest cavities. They also steal other bird’s nests by bullying smaller birds. Nests could be inside buildings, hollow trees, and human-made nests.

Recognition: Size & Shape: House Finch is 5 to 6 inches in length from its bill to the tip of its tail. Roundhead with a medium-sized tail. They have a short conical bill. Males have reddish-orange (rarely yellow) chest, crown, and a brown body.

Habitat: They have urban breeding habitats. Commonly seen in rural areas and towns.

Diet: Primarily, they eat grains, sunflower seeds, berries, and may incidentally eat insects like aphids. They love bird feeders and are frequent visitors, and also like to eat from tube feeders.

Recognition: Size & Shape: The species has a round head with a very short neck. It has a long tail and a smooth brown body above. It is pale grey below, has black and white stripes on the head. The beak is short and conical. Yellow spots are there on its eyebrows.

Habitat: Mainly spotted in open woodlands, bushes, and forests. They can be found in small flocks near the ground in search of food.

Recognition: Size & Shape: The species measures from 6 to 8.3 inches in length. It has a chunky head with a short tail. The beak is small, straight, and a little curved at the end. Males are blue with a white belly and orange neck portion. Females are almost greyish in color.

Diet: They eat insects and other invertebrates primarily. May also eat berries, beetles, crickets, and earthworms.

Recognition: Size & Shape: The species length is between 5 to 5.5 inches from its bill to its tail. It has a very short tail and legs with a large head. The beak is straight, thin, and long. It is grey from above and white from below with a black cap at the top.

We have given below a list of common birds in Virginia with their videos.

The videos contain information about their behaviour, migration, their habitats, sounds they make, and other interesting facts. 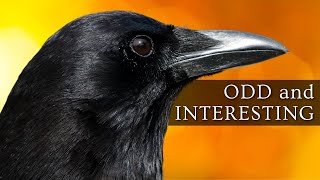 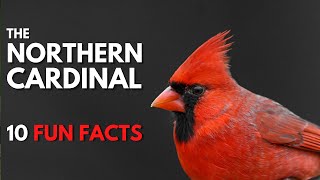 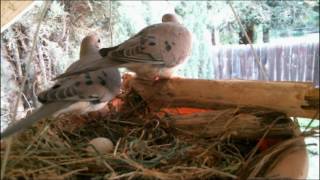 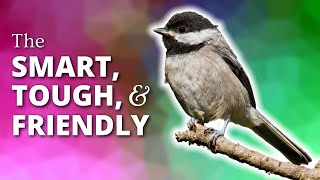 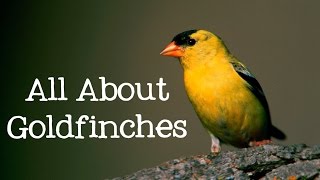 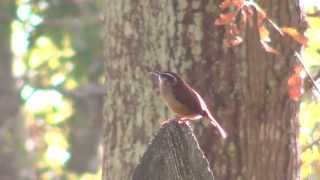 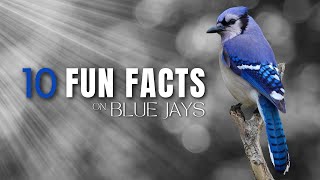 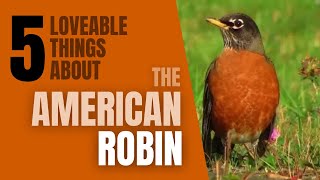 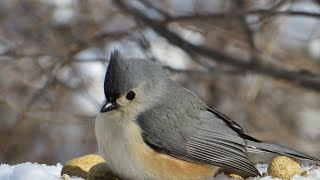 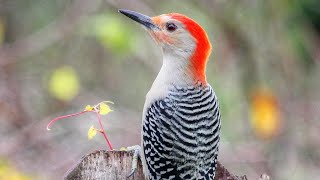 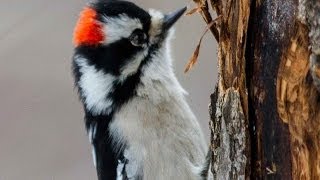 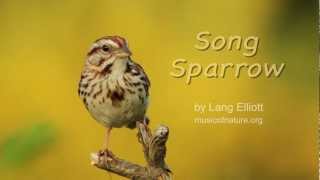 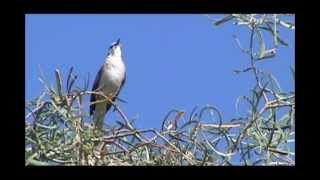 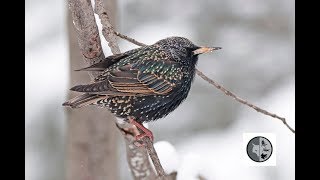 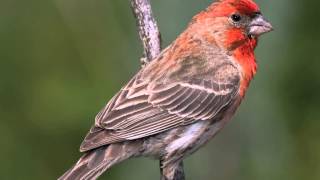 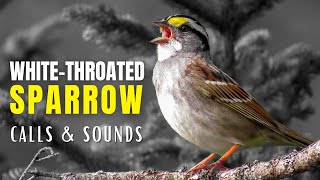 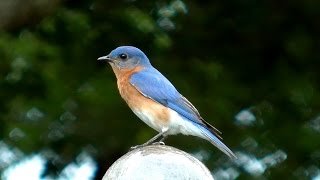 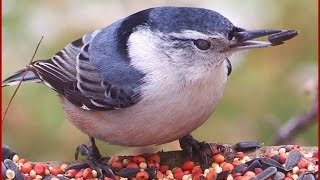 List of the most birds in Virginia by season and their frequency.

Given below is the list of birds in Virginia according to different seasons and how frequently they are seen.

Season: Winter (from December to February)

Season: Summer (from June to July)

Season: Spring (from April to May)

Conclusion: The article contains a list of the birds in Virginia that you can see in your backyard. Their behaviour, diet, and how to recognize them is given briefly. In what seasons are they seen and how frequently is also given in this article.

You may also like : 10 most Dangerous animals in the world

How to Read Political Prisoner by Paul Manafort Online?